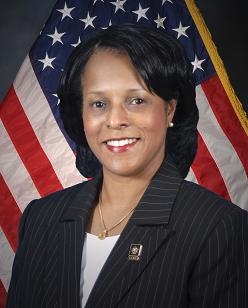 Mrs. Weatherington is a retired United States Army Medical Service Corps Colonel who served in command and staff positions over a span of almost 30 years. She assumed duties as the Deputy Chief, Medical Service Corps from 2004-2007. Prior to this assignment, she was the Deputy Chief of Staff for Personnel, US Army Medical Research and Materiel Command, the installation G-1 and Troop Commander at Ft. Detrick, MD and Assistant Chief of Staff for Personnel/G-1 for the North Atlantic Regional Medical Command, Washington, DC.

Mrs. Weatherington maintains professional affiliations and membership on several boards of directors. She is a board certified healthcare executive and is a Fellow in the American College of Health Care Executives. Ms. Weatherington is a member of the Interagency Institute for Federal Health Care Executives. She is also involved in numerous community and church related boards and holds several leadership positions. Mrs. Weatherington is a native of Petersburg, Virginia. She earned a Bachelor of Arts degree in Early Childhood Education from St. Augustine’s College in 1978. She graduated Magna Cum Laude and was designated a Distinguished Military Graduate upon graduation from ROTC. On 21 June 2002, she was inducted into the St. Augustine’s College Army ROTC Hall of Fame. She was awarded a Master of Science Degree in Personnel Management in 1983 from Troy State University in Montgomery, Alabama.

She and her husband Walter have two children, one daughter-in-law, 2 granddaughters, and 1 grandson: Linwood, Brigetta, Vanessa, Laila, Blaire and Wolfgang.